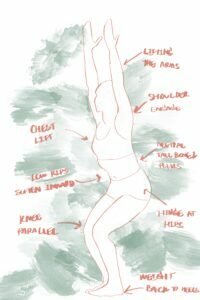 Utkatasana – Chair or Fierce Pose. Utkata means Fierce, powerful in Sanskrit. However, it’s commonly known as chair pose as it’s resemble the action and shape of sitting on a chair. Utkatasana activates the largest muscles in your body. It’s engaged the core and improving your thigh strength. Muscles around the thighs, hips and core are engaging strongly into this squatting position. Lifting of the arms overhead will further challenge core strength and engages shoulder muscles. For a person with high blood pressure can put the hands at the hip to avoid blood raises and lighten the load.

Pectoralis major and Serratus anterior engaged to bring the arms over head. Deltoids engaged to abduct the arms to raise up closes to the ears and help to heeled the arms in shoulder flexion. Triceps engages to extend the elbows.

Cervical extensor engage to prevent the head to drop to the front. Upper Trapezius slightly engage to lift scapulae.

Clave muscles including gastrocnemius and soleus engage while lengthening. Ankle Dorsiflexor especially Tibialis anterior is strongly engaged to stabilized the feet and ankles.

4. Lifting up the arms raising blood pressure and the lumbar load which test the cardiovascular system and core muscles.