Thousands of years ago in ancient India, a sage named Patanjali wrote a series of great works describing the art of living. Of which was the Yoga Sutras: a compilation of 196 texts that cover Ashtanga, The Eight Limbs of Yoga. Ashtanga is one of the several pathways to practise in life towards enlightenment. 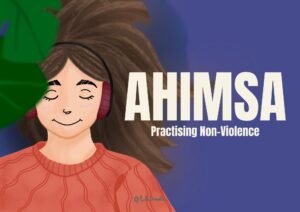 Ahimsa is the first of the five values described in Yama. Yama, according to the sutra, governs the moral value of the individual. It is also the easiest for us as individuals to act and change before we move on to the next limb in Ashtanga.

Ahimsa may be broken down into two entities – ‘A’ which means ‘not’, and ‘Himsa’ which means ‘hurt’. The word encompasses the idea behind no harm, no violence, and no evil to self and non-self – others, the environment, and other living organisms, in the present and the future. The idea includes not just your actions, but also your thoughts, as thoughts give birth to actions and repeated actions contribute to a habit. A culmination of habits leads to your eventual character.

The practice of Ahimsa could be active or inactive.

For instance, acknowledging climate change and doing something to reduce your carbon footprint is better than remaining the status quo and doing nothing. Some intention and action towards betterment are always better than nothing.

Another example: pushing yourself to complete a challenging project but not to the extent of destroying your health or sanity. Understand your current limits, test your boundaries but not go overboard.

Practising Ahimsa is difficult. It is all about finding the perfect balance between inaction and over-enthusiasm.

In this fast-paced society of ours, we are constantly bombarded by information about others who are better than us. What we see are the fruits of someone’s years of labour.

Yet, we want their ‘success’ and like to compare and think of our progress as slow and unproductive. But everyone moves at their own pace. When impatience and self-criticism seep into our minds, we push ourselves more to the extent of harming ourselves.

For instance, we see people doing handstands and think we could do it within a week. Or we see someone doing a cool trick on their snowboard and think we could do it within the season. Or we see someone reaching high ranks in the corporate world and decide to double our effort into our work and sacrifice our health and time for ourselves and others.

Rushing through without taking stock of our current abilities would only be injurious. What we ought to be doing is to think if we would enjoy and be happy doing it without causing grievous harm to the body.

The choices we make affect ourselves and others around us in the present and the future.

One popular topic relating to Ahimsa is our diet. Some vegetarians or vegans postulate that humans should stop eating animals or animal products. Eating fewer animals is ideal as we would be reducing our carbon footprints and also subjecting animals to less cruelty. But not everyone has the choice to do so, as everyone has a unique body. Some individuals may suffer from nutrient deficiency from the lack of small amounts of animal protein. Not everyone may be able to afford nutritious non-animal products in the place they live in, or given their situation. The idea is to strike a balance and try to make better in your diet whenever you can.

Another example prevalent in a developed country like Singapore is our energy and resource consumption. Have we put in thoughts to reducing our environmental impacts? For instance, using our containers to takeaway food and reducing our usage of disposables. Or adjusting the thermostat for the a/c to be moderately comfortable without being too cold.

Negative thoughts affect our mood and our general wellbeing. We could be the healthiest or the most environmentally-conscious person – eating well, exercising frequently, and minding our good habits. But if our thoughts are poisonous, our good efforts in other areas would be voided.

Thinking negatively affects our physiology unconsciously. It could make us feel more stressed, and unhappy and impact our interaction with others. Those thoughts would eventually make their way to our physical body and could bring in illnesses and discomforts.

‘Non-violent’ and loving thoughts make us see the world as a better place and make us feel calmer and at peace with ourselves. These would translate to our interactions with others. Imagine being the calm and peaceful one in a confrontation. Being calm and aware of the situation gives you a clearer mind to defuse the conflict. Whereas absorbing the negativity and acting on it would only escalate the situation.

Begin practising Ahimsa daily and feel your life-changing for the better.