In my Yoga Teacher Training (YTT) journey so far, the two challenging yet fulfilling poses for me are Crow pose and Headstand. While I am still working on refining the poses, it is always interesting to understand the muscles worked for them.

This is an arm balancing pose, whereby the knees are pressing on the arms. It targets on the following muscles:

While it is generally considered as an advanced pose, it can be an intermediate pose for people who are more flexible, and hence less force is exerted by the legs pressing on the arms. Currently I am able to hold the pose for 10 seconds, but I believe I could have engaged more of core muscles and hip flexors to lift the body weight more upwards. 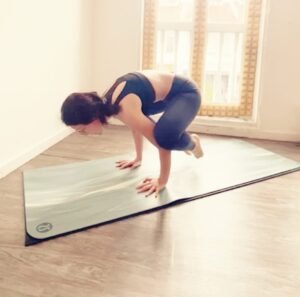 This is one of the most important yoga poses (nicknamed as “king” of asanas), whereby the body is completely inverted, and held upright supported by the forearms, while the crown of the head rests lightly on the floor. It is considered as an anti-aging pose, as more blood flows to the head.

Most of the muscles are involved in the pose, while main targeted muscles are as following:

Again it is generally considered as an advanced pose, and I have prepared it by doing more beginner/ intermediate post like dolphin pose to build up my forearm strength. Currently I have been practicing it with the help of a wall, whereby I still need to tap my feet on the wall most of the time. As next step, I will work further on my core muscles and glutes to achieve balance off the wall. 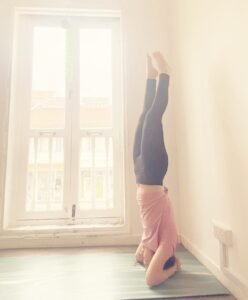