Roughly, there are two types of neurotransmitters: 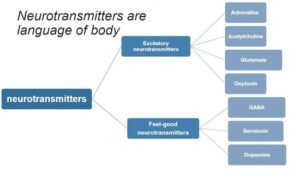 Adrenaline: adrenaline is responsible for the body’s fight or flight response. Neurotransmitters like adrenaline can help your body to know how your brain wants to respond to stressful situations

Acetylcholine: acetylcholine works at the neuro-muscular junction where the nervous system and muscles meet. The presence of acetylcholine triggers an action potential or command in the muscle fiber to make the muscle contract.

Glutamate: glutamate is an excitatory neurotransmitter in the cerebrum part of the brain. Problems in making or using the glutamate is linked to a number of mental health disorders like Autism, Schizophrenia, Depression, Obsessive-compulsive disorder (OCD).

Oxytocin: oxytocin is a powerful neurotransmitter that affects many bodily functions. Oxytocin is often dubbed as the ‘love hormone’, serving as a wonderful antidote to the stress response as it lowers your blood pressure as well as decreases the hormone cortisol which is responsible for the fight-or-flight response.

GABA: GABA is the “downer” neurotransmitter that blocks impulses between nerve cells in the brain. Researchers suspect that GABA may boost mood or have a calming, relaxing effect on the nervous system.

Serotonin: Serotonin is the key hormone that stabilizes mood, feelings of well-being, and happiness. This hormone functions as a neurotransmitter that impacts the  entire body. It enables brain cells and other nervous system cells to communicate with each other. Serotonin also helps with sleeping, eating, and digestion.

Dopamine: dopamine is a neurotransmitter made by the body, and the nervous system uses it to send messages between nerve cells. Dopamine plays a role in how we feel pleasure. It’s a big part of our unique human ability to think and plan.

Research shows yoga brings measurable changes in one of the body’s neurotransmitters, adrenaline, the one charged with propelling us into action during the “fight or flight” response to stress.

Modern life patterns tend to our stress response often lingers in the “on” position at times it shouldn’t. Yoga helps dampen the body’s stress response by reducing levels of the hormone cortisol, which not only fuels our split-second stress reactions, but it can wreak havoc on the body when one is chronically stressed.

A 2007 study found that practicing yoga postures increased levels of GABA in the brain. A group of experienced yoga practitioners showed a 27% increase in GABA after 1 hour, compared to the group who sat and read for an hour. Those in the group who were new to yoga had a 13% GABA boost over a 12-week period. To conclude, people can be trained to practice yoga in a relatively short time with a measurable effect, the associated change in GABA levels may increase with experience.

Yoga helps release serotonin naturally. Serotonin levels increase while people are concentrating on breathing and putting the focus on mindfully being in the moment. Plus, the areas of the brain that respond to stress and send out hormones in response to such stressors are deactivated during this time.

Low levels of dopamine are linked to reduced motivation and decreased enthusiasm for things that would excite most people. A 3-month study found that performing one hour of yoga six days per week significantly there’s a 65% increased dopamine levels. Many who practice yoga Nidra report feeling fully rested in as little as 30 to 120 minutes of practice. That’s a lot shorter than the eight hours of sleep usually required for that type of restoration. And then 5 percent dopamine boost.

Yoga therapy has been demonstrated to be useful in treatment of negative symptoms and improving the socio-occupational functioning and emotion recognition deficits in antipsychotic-stabilized schizophrenia patients.

Glutamate is our main brain excitatory transmitter — it wakes outthought, too much glutamate can be a problem, because it creates too much excitement in brain up.  Balance is important in the brain. Hence, we need a balance between glutamate and GABA.

Yoga has been studied as an adjuvant treatment across a broad range of psychiatric disorders and is shown to have short-term therapeutic gains. Emerging evidence from recent clinical in vivo experiments suggests that yoga improves GABA-mediated cortical-inhibitory tone and enhances peripheral oxytocin levels.

Concentration, focus and attention stimulate the nucleus basils to produce acetylcholine, which in turn instructs the brain to repair the memories that are damaged.

Deep breathing, yoga and meditation are great ways to Increase acetylcholine and decrease the levels of stress hormones.