Master Yogi Bhajan developed Kundalini Yoga and disseminated it in California in the late 1960s, with the aim of helping a whole generation of Westerners to awaken their consciousness and break with their addictions. Yogi Bhajan received a Ph.D. in psychology from the University of California. To better build bridges between East and West? After all, Indian kundalini and Freudian libido are not so far apart.

Drawing by my daughter Clementine 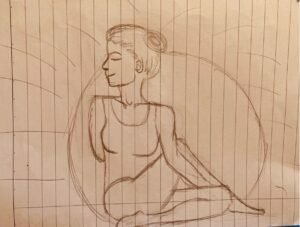 Is Kundalini the way to (re)activate our sexual energy?

Kundalini Yoga’s principles are to awaken in all conscience! The kundalini translates cosmic and sexual energy, curled up at the sacrum. This vital flow at the origin of any creation must be able to flourish along the spine to the top of the skull, in the most fluid way possible.

In the great family of yogas, this technique invites us to fuse spiritual and sexual energies within our bodies. Songs of mantras, white turban, initiation work around   sexual energy … This confidential form of yoga capitalizes on interiority, far from the acrobatic exhibitionism often highlighted in the yoga planet.

The basis of the courses is the “kriya”, an active meditation that includes a yoga posture (asana), a position of the hands (mudra),  a breathing technique  (pranayama), an object of mental concentration  and a song (mantra). The duration of the kriyas, sometimes accompanied by music, varies   between half an hour and an hour. Unlike the esoteric, vaguely sulphureous image of kundalini yoga, its application is very concrete. The unfolding of each session is similar all over the world.

Once you sit on your mat, you sing three times an opening mantra, which connects you to yourself and your inner guide.  The sound dimension is essential because it activates our own vibration and works at a molecular level.

Then comes the time of warm-up, with special attention paid to the spine and the breath! Inspirations, exhalations and apneas are sustained, while squeezing and letting go of the perineum. Once the body is relaxed, one or more kriyas are practiced. The Kriyas differ from session to session.  There are hundreds of them, and everyone works on specific organs, glands or emotions.

In kundalini yoga, everything is connected, which is why it is also called the yoga of consciousness. What we absorb – air, food, water, emotional experience – crystallizes in us and stagnates, creates   knots, points where energies no longer circulate.

The snake curled down the spine, coiled, dormant. The kriyas mobilize it and help it to climb by wrapping itself through the seven chakras. These centers where energies converge are each connected to an endocrine gland.  Ovaries, adrenals, pancreas, thymus, thyroid, pituitary gland, and pineal gland at the top of the skull… Vital energy will purify these circuits one after the other, from bottom to top, to open up to an expanded consciousness.

The rise of the kundalini irrigates the energy, emotional, sexual, spiritual and psychological spheres.

The invitation to self-exploration offered by kundalini yoga is a boon in a society where people are stressed on a large scale. We struggle to release the pressure, to find time to be at home and in oneself, with our loved ones. It is often in crises that one feels the need to effect real change. We are heckled professionally or emotionally, and we end up with a therapist… or on a yoga mat!

Those who simply enjoy singing, an activity that provides calm, energy and joy, will feel carried by the collective sound vibratory.   It’s not visible, but it’s very powerful. These mantras are sacred. They have been sang for thousands of years. If you do it in conscience, you connect to a whole chain of spiritual teaching.

The best thing is to try a course without thinking too much before, in order to feel the whole process with as much openness as possible.  Fashion passes, the effects of yoga remain.

So, YOGA does improve sexual practice for both men and women. If you need proofs, read the study published in the Journal of Sexual Medicine. Forty women reported their sex lives before and after yoga sessions for twelve weeks. As a result, three out of four women, including all women over the age of 45, reported an improvement in sexual activity after training. For men, a study  by Dr. Vikas Dhikav, a neurologist at Dr. Ram Manohar Lohia Hospital in New Delhi, India, found that yoga has so many benefits. After twelve weeks of exercise, the researchers found improvements in all aspects of men’s sexual satisfaction: “desire, sexual satisfaction, performance, confidence, partner synchronization, erection, ejaculation control and orgasm.” In addition, the researchers realized that yoga is an alternative to treating premature ejaculation.

So which postures for better sexual life?

At the end of the day which ever YOGA practice you choose, Kundalini or else, it helps you listen to your body and some postures stimulates the pelvic area !