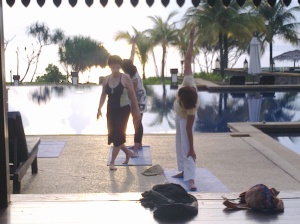 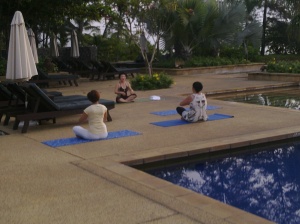 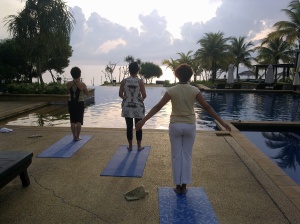 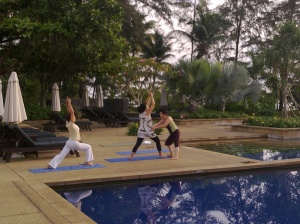 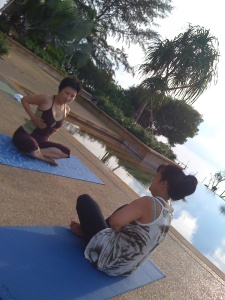 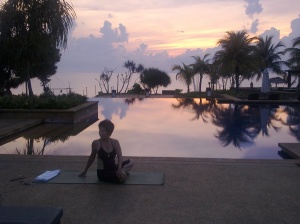 Exactly a week after my 200 hr YTTC was my birthday; one of the big “0”s. To celebrate the beginning of a new century and having survived the 3 week gruelling course, my husband and I drove across the Malaysian peninsula to the East Coast to spend a few well-deserved halcyon days at a spa resort.
The resort was breathtakingly beautiful and our accommodation was a luxurious and spacious wooden Malay style bungalow facing the South China Sea. The spa or warong was just a stone’s throw away and the sea breezes wafted the scents of essential oils that engulfed our balcony with intoxicating sweet aroma. A huge scented frangipani provided a canopy over our open air bath tub. As we laid in it looking up, the flying squirrels in the tree entertained us with their acrobatic prowess.
At dawn the following day, I saluted the sun as it appeared above the horizon on a platform built under the casuarina trees on the beach. As if by magic, the hues changed on each inhalation as I looked up.
Later that day, the guest liaison manager approached me and asked if she could join me the following morning. Nothing escapes this young lady (Ms G) who had clearly spotted me amongst the trees. I was delighted at this request and asked her to spread the word that there will be a Yoga class at 7 am the following morning. What an opportunity for me to conduct my first Yoga class with students other than family members.
I was thrilled and could not hope for a better birthday present that came so unexpectedly. I spent an hour preparing my lesson plan.
The class was held by the infinity pool and one other guest joined us. Ms G apologised as she did not have time to approach many guests. But I was grateful for the class of 2!
The other lady who was from Australia, was a dedicated gym bunny and contemplating taking up Yoga as years on the treadmill had given her bad knees and the weights had bulked her muscles but her chest was concave. Her joints were very stiff so I extended my warm up by about 5 mins to loosen her up further. When it came to sun salutation, she struggled as her spine was inflexible. Whilst Ms G who was very flexible carried on with her 5 rounds of surya namaskar I concentrated on the gym bunny, breaking down the sequence and helping and aligning her in each pose. After the third round she was able to almost touch her heels on the ground in downward dog and I sensed that she was happy with her progress.
Interestingly, although she claimed her knees were giving way, she was able to cope with Baddha Konasana (butterfly pose) and Virabhadrasana 1 & 2 without too much difficulty and no pain was felt. There is hope there and how I wish we had more time!
I asked for feedback and they both felt that they had had a good work-out. Ms G said that my class was a good re-introduction for her as she had not practised for 6 months. They both enjoyed the sequence and the warm up exercises.
The Australian lady said that she appreciated the attention and encouragement given to her and just as she felt that she had had enough during the sun salutation, I came to align her and coaxed her further into the poses by reminding her to breathe. She also appreciated the calmness of my voice and the explanation of the benefits of the asanas. The breathing practice they both found useful.
Although there was no negative feedback, I felt that the feedback given was genuine and it was so fulfilling to see for myself how a stiff body can within a short time be gently eased into a pose with encouragement and working with the breath.
I am over the moon about this unexpected experience; indeed the icing on my birthday cake!

2 thoughts on “The icing on the cake”