I stumbled into a video while revising for my YTT200 on pranayama, which later metamorphosized into the research on the effect of breath on our brain. The hour-long research culminated with a TEDTalk video by a brain researcher, Jill Taylor, who survived a catastrophic stroke and lived to tell the tale of stroke on the human body from her unique perspective. You can watch it here.

In the video, Dr Taylor described the process she felt as one part of her brain began to fail. While her video did not specifically bring in the concept of alternate nose breathing, it did spark an interest in me to dive in and see what the internet has for me. 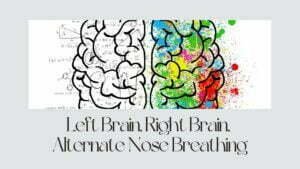 If you have been paying attention, you would know that alternate nostril breathing is one of the pranayamas taught and practised in class. Anulom Vilom is the practice of inhaling from one nostril while exhaling from another nostril. In this pranayama, the right hand is drawn into the Vishnu mudra – index and middle fingers pressed on the mount of thumb – and the left hand is placed in Chin mudra – the tip of the index finger touches the tip of the thumb.

According to the yoga sutra, the right nostril signifies the sun – Surya – and heats the body. The left nostril represents the moon – Chandra – and cools the body.

Inhalation should be shorter than exhalation as you practise alternate nostril breathing.

Nadi Shodhana is another alternate nostril breathing technique. Unlike Anulom Vilom, there is a holding phase between inhalation and exhalation. For example, you could be inhaling air for three counts, holding your breath for nine counts, and exhaling it through another nostril for six counts.

Nadi Shodhana clears the mind much more efficiently than the basic Anulom Vilom.

Now let us bring the brain into the discussion.

Our brain has two hemispheres with vastly different characters. Physiologically, they control alternate sides of the body.

In theory, the right brain is the imaginative one that likes to daydream, delve into emotions and multitask. In short, it lives in the present and thinks in images.

The left brain is the staunch and serious one that likes to plan and analyse and prefers logical thinking. It thinks methodically and dwells in the past and the future.

When our right nostril is clear, it is a sign that our left brain, the methodical and logical part, is functioning better at the moment. We may be better suited to solve problems, read or write.

When our left nostril is clear, our right brain, the creative and artistic part, is working better at the moment. Instead of studying or contemplating a difficult task, create some new art or relax over music.

It is usually very rare to have both nostrils absolutely clear. One side will be more dominant than the other.

Pranayama, the brain and unblocking your nostrils

Drawing on our learnings on Anulom Vilom, we learn that the right nostril heats the body, and the left cools the body.

Too much heating could lead to overexcitation and anxiety. Too much cooling makes us lethargic and inert.

While Anulom Vilom can help to balance both sides of the brain, it works better if both nostrils are at least unblocked. You could unblock the nostrils by practising another pranayama – Kapala Bhatti. Doing several forceful and intentional exhalations using the abdominal muscles helps to clear the sinuses and set the stage for a better Anulom Vilom.

Practise Anulom Vilom whenever you need a pick-me-up and observe its impact on your attention and anxiety level as you harness the power of both brains through this easy alternate breathing practice.