When I first started yoga, I realized I had a lot to work on to be able to get into a number of postures. I thought the two most important things for me were building arm strength and gaining flexibility. Both were true, but taking this YTT course made me realize I had omitted the most important thing: the hip, and particularly the hip flexors.

The hip is the foundation to almost all poses and is the key to understanding even the most simple asana that you thought you had mastered. It is the central element of the body that grounds us.

But what exactly are the hip flexors and why are they so important?

The hip flexors are actually a group of muscles at the top of the thighs which enable us to walk, run, jump, climb stairs, so, yes, the basics (which is why we tend to totally forget about them). They include the tensor fasciae latae, the pectineus, the rectus femoris, the sartorius, the iliacus and the infamous psoas (the psoas major being the primary flexor). Together, these muscles allow the flexing of the hip and also help to stabilize the spine.

The iliopsoas contract in triangle pose to allow the pelvis to tilt forward. The key in bringing awareness and engaging this muscle as described in Bandha yoga’s psoas awakening series, is to “imagine lifting the forward leg straight up toward the ceiling”. 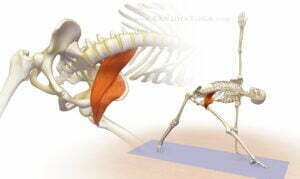 During this course, I realized that, as a general rule of thumb, the more challenging the poses become, the more they require strong hip flexors. Bringing awareness to these “hidden” muscles, strengthening and learning to engage them is therefore essential to any yoga practitioner who wants to improve. Of course, a strong core and a strong back will help balance, and will altogether help achieve those poses that just seem impossible!