Yoga is my true love but Aerial Yoga comes pretty close too. If I’m not on my mat doing yoga flows, you can find me swinging on a hammock, doing new tricks and turning upside down.

What is Aerial Yoga?

Aerial Yoga is known as Anti-gravity yoga and shares many similarities with Yoga. In Aerial Yoga, students use the hammock, a swatch of soft and smooth fabric suspended from the ceiling, as a tool to support their weight so they can suspend in the air in different aerial yoga poses, acrobatic postures, or go into inversion poses easily. Aerial yoga exercises incorporate elements of dance, yoga, pilates, aerial acrobatics, allowing students to hone their flexibility, strength and balance. Balance is important in aerial yoga as students need to be stable on the hammock before they can deepen their practice. In addition, aerial yoga consists of climbs, flips and drops, which require a lot of core strength and flexibility. While aerial yoga is typically done indoors, you can take it outdoors too! 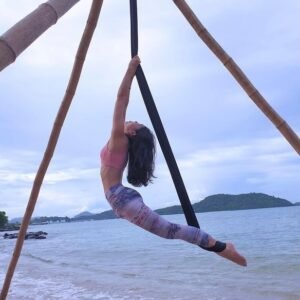 Aerial Yoga is a new form of yoga, having been introduced around the 1990s. The origin of aerial yoga is not clear but some attributed it to famous yoga guru, B.K.S Iygengar who brought the yoga swing to his students, to demonstrate the benefits of inversion. Some traced it back to former gymnast Christopher Harrison who pioneered the first aerial yoga workouts in 1991 with a group of gymnasts who wanted to continue doing aerial moves after retiring. Nonetheless, thanks to these founders, we get to enjoy aerial yoga as a form of exercise and a fun activity to do with loved ones today!

Aerial Yoga is good for the body and mind

Why should you try out Aerial Yoga? This form of yoga has many health benefits!

The American Council on Exercise commissioned researchers from Western State Colorado University to conduct a study to evaluate the health effects of a single Aerial Yoga session and a 6-week Aerial Yoga Intervention in 2016. For the 6-week programme, 16 female volunteers between the ages of 18 and 45 participated in 3 50-minute Aerial Yoga sessions per week i.e. 18 sessions altogether in the 6-week programme. Findings showed that a single session of Aerial Yoga, offered participants benefits associated with low-to-moderate intensity aerobic exercises like brisk walking or leisure cycling. Additionally, the 6-week intervention resulted in a measurable reduction in common risk factors (body weight, body-fat percentage and blood pressure) for cardiovascular heart disease. With other factors controlled in this study, the combined improvements in these risk factors suggest that participants reduced their risk of heart attack by 10%.

As we hang upside down using the aerial hammock, decompression of the spine happens i.e. the gravity gently pull apart the vertebrae and discs of our spine to allow fresh synovial fluid, oxygen and other nutrients to flood in and nourish them, while relieving the pressure that has accumulated in our bodies. This helps to lengthen the spine and heal back pain, making it very beneficial for those who faced back issues.

As we try to keep our balance on the hammock, we are activating our pelvic floor, paraspinal muscles, gluteal muscles and abdominals, which contributes to core strength, which is important as it affects our back health too. As the stability of the ground is removed, our core works harder to keep us balanced. The muscles surrounding our spine supports and protects the vertebral column, keeping them conditioned and flexible, to prevent any aches or pains that may occur due to knots and tension. In Aerial core classes, the focus is on building strength, hence students do planks, pikes, crows, side crows, one legged side crows and chaturangas, using the hammock, to build both arms, shoulder, back and core strength. Apart from that, aerial poses require a lot of maneuvering of the hammock, which requires a lot of flexibility. As we relax the body while being suspended in the air, tension is removed as the gravity helps to deepen our stretches, lengthening our ligaments and relaxing our muscles, which improves flexibility.

“You are one class away from a good mood” – Aerial Yoga is an epitome of this quote! I mean this literally, because aerial yoga gets your blood flowing and releases “feel good” endorphins. If you are having a bad day, or feeling stress over something, aerial yoga can calm your mind. I love going into inverted butterfly pose, closing my eyes and focusing on positive thoughts or simply letting myself meditate.

Beyond stress relief, the benefits of being inverted includes better focus, improved concentration and memory, as blood flows to the brain to provide oxygen. When doing Aerial Yoga, energy is concentrated on the body, especially on the techniques of going into the poses. To get into an advanced aerial pose, requires participants to remember the steps to get into the pose. This heightens our body awareness and builds our neural connections, which enable better memory power.

Aerial Yoga provides a deep tissue massage, allowing us to experience a deep fascia release. Fascia is a connective tissue that surrounds all body parts such as organs and muscles. It connects muscles, bones, tendons and ligaments together. When we are in aerial yoga poses, the hammock compresses some of the deeper connective tissues in our body, releasing any tension. At the end of the aerial class, students are encouraged to hydrate themselves plenty to flush out the toxins that get released.

Aerial Yoga is typically ‘Yang’ type of poses as it involves plenty of core work and engaging of the abdominal, shoulders and gluteus muscles to go into the poses. The hammock height for aerial classes usually falls nicely around your hip bones when you tip-toe and press down on the hammock. It should also land nicely around your sacrum when you are inverting with the hammock. Aerial Yoga can also have ‘Yin’ poses. For Aerial Yin classes, the hammock is used as a prop for students to go into gentle backbends or forward passive stretches. Students would usually be lying or sitting down in these stretches. The height of the hammock would sit nicely around the knee area.

Can everyone do Aerial Yoga?

Everyone can do traditional yoga on the mat, with variations and modifications for certain poses, however this is not the case for Aerial Yoga. It is recommended for students with heart disease and extremely high or low blood pressure to avoid this form of yoga as the poses will involve students turning upside down. When the head is below the heart, the sudden flow of blood to the head is not safe as it will lead to an increased risk of stroke. Those with motion sickness should also avoid Aerial Yoga as there will be plenty of swaying action in the hammock, which contributes to dizziness and nausea. Always check with the doctor before you engage in any physical exercises to ensure that you are clear and safe to engage in the activity.

For those without the above symptoms and are cleared by the doctor to do Aerial Yoga, there are different types of Aerial Yoga styles to choose from. Aerial Core, Aerial Flow, Aerial Yin, Aerial Basics are similar to Hatha, Vinyasa and Yin yoga. Beginners can always start with the Basics and even if they join a multi-level class, instructors would usually provide a breakdown of the sequences and beginners can stop at wherever they feel comfortable.

Why I love Aerial Yoga

It’s not about the pretty acrobatic acts or fulfilling my dream of performing in a circus. I like Aerial Yoga because it empowers me to face my fears and to find comfort in discomfort. I have a fear of heights, but when I do Aerial Yoga, it helps me to treat these fears as challenges, and it gives me the courage to attempt poses that I may not have the arm strength for.

Leaving you my favourite quote to conclude this post: “I bend so I won’t break, I invert so I know how to deal with things that turn upside down.” Try Aerial Yoga if you have not, and let me know how you find it. Sending you peace and light. (: