“I do Ashtanga,” “I’m more of a Vinyasa!” … Vinya what??? When you start Yoga, you can quickly feel lost and not know where to start! Which Yoga best suits your needs? What do all these exotic names mean? Is it only marketing? Is there really some differences? To find what’s best for you, you should follow your cravings! And nothing prevents you from combining several styles according to your desires and needs of the moment! And the best thing is to try !

Drawing by my daughter Clementine 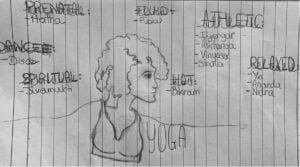 The CLASSIC ONES: from SLOW to ATHLETIC

It is one of the most common forms of Yoga. In general, classes consist of a series (rather slow) of postures held long enough, breathing exercises or even meditation and end with relaxation. It is a postural Yoga, in which the sequence is done by coordination with the breath. Very good to start and learn the basics of Yoga!

Developed in the 1940s, this very popular and dynamic form of Yoga already requires a good physical condition. Series of postures are chained in a precise order and increasing difficulty, which gives an almost meditative repetitive character! These sequences are coordinated by slow and sound breathing (Ujjayi). Excellent for those who want to develop their endurance!

Vinyasa is a creative variant of Ashtanga. The rhythm is sustained, the postures are chained with fluidity and their order is free and varied, all sometimes in music. As with Ashtanga, breathing coordinates and harmonizes the sequence. Moreover, in Sanskrit, Vinyasa means “synchronization of movement on breathing”. Ideal for those who want endurance but find Ashtanga too repetitive!

It is a therapeutic and relaxing Yoga, working with simple postures on the floor. Asanas are held seated or lengthened for 3 to 5 minutes to reach deep tissues and relax muscle and so the energy flow is revived.

As you understand, this Yoga is for pregnant women! From 3 months of pregnancy and until delivery, mothers-to-be can take advantage of this course to relieve all the tensions associated with their pregnancy. This practice focuses on breathing, to gain serenity, connect with your baby, and prepare for a more relaxed delivery.

If you’re having trouble finding sleep, practicing Yoga nidra before you sleep will help you reach Morpheus’s arms… It is practiced elongated, guided by the voice of the teacher who brings us to another dimension of ourselves. Almost like a meditation. You will come out deeply relaxed and refreshed. Accessible to all without any physical requirements. You just have to lie down and let yourself be guided!

Literally “state of liberation” in Sanskrit. Although this practice is rather recent, created in the United States in the 1980s by David and Sharon Gannon, it emphasizes the ancestral teachings of Yoga. A true philosophy of life (even adopted by the stars!), the Jivamutki is based on body work inspired by Ashtanga and Vinyasa Yoga, singing, deep breathing, meditation and music. The peculiarity is that a theme of spiritual reflection is introduced at the beginning of the course.

MODERN ONES: From playful to perfectionists

This latest born, created by New York model Tara Stiles, is accessible to all, playful, and very positive! In this practice, which is gradually arriving in France, we forget the traditions and the spiritual dimension. We go there to move smoothly and uninhibited, on sequences mixing fitness, yoga and good humor! Tara Stiles describes it as a way to exercise daily, while feeling good about her body and having a good time.

Have you ever tried to hold the tree posture while dancing on “Mamamia”? This new concept offers fun and uninhibited Yoga. The classes run like a Vinyasa class, but with disco music (everyone loves disco music… Yes, admit it!), good humor and a good excuse to decompress and release all his little hassles for a class!

Do you know yoga bikram? This form of “hot yoga” is practiced in a room where heat of 40 degrees C. Heat helps to relax the muscle to better achieve postures. Bikram yoga derives from Hatha yoga, which is a form of effort-based yoga. Also known as hot yoga, Bikram yoga is a contemporary yoga that offers 2 breathing exercises, as well as 26 postures, also called “asanas”. During the 90 minutes of a bikram yoga class, you practice breathing exercises of course (pranayamas). To practice yoka bikram, dress light, do not hesitate to put yourself in a brassiere, because you will sweat a lot … Don’t forget your towel!

Did you ever play airplane on someone’s feet when you were a kid? Well.. that’s ACROYOGA! It is a mixture of three disciplines: yoga, elements of low acrobatics, rather gentle and accessible, and Thai massage. This duo practice is both solar and lunar approach. The practice of acro-yoga is particularly relaxing and therapeutic for both partners.

The Iyengar, founded by B.K.S Iyengar and part of modern Yoga practices, is based on the alignment and precision of postures. Very demanding, this practice is more suitable for perfectionists! Yoga accessories, such as blocks, straps or cushions, are often used to help achieve certain postures. This can help some beginners with flexibility problems! I don’t like this type of yoga so much. I am not a perfectionist…

Master Sree said we could fill a form and have our own yoga registered. So it got me thinking. What type of Yoga would I like to create? I think I would have to go with a mix of what already exists but more so I would create a “Feminine cycle yoga”. The week I have my period, Hatha Yoga, the week I am full of energy Ashtanga type, the week I ovulate, dancing Yoga, the 4th week I would work specifically on mindfulness and stress… Watch out…It might come sooner than later.

To conclude this mini guide I compiled from my books, own experience, research, I think I should add the choice of the teacher. Some speak a lot, some have the most gentle voice, some are pushing your limits,…we are all humans, we all have our preference, and we certainly have our moods, so try and find out who is your master. One of my favorite teacher has been a late evening class in New York, during my favorite posture, “Savasana”, she would gently come and touch my skull, and I would fall alseep . Of course what can I say about Master Sree, he gets me to do things I never imagined my body could do and I am not young anymore…If a 42 years old can do, everyone can do .

*Note that I did not list all type of yogas as there are hundreds (Nude Yoga, etc…)

Drop us a message