Whoever said you can’t drip sweat while practicing yoga? Whether you have sweaty palms or are a hot yoga junkie, a yoga mat that does not slip under your hands and feet from the sweat of your practice is essential. I especially have sweaty palms on and off the mat.

When I went to my very first yoga class without my own non-slip mat, I had a hard time staying in a downward facing dog. My heels couldn’t touch the mat, my shoulders were tight and my palms were sliding forward due to the sweat. To say I was struggling doesn’t even scratch the surface. Looking around me, I saw how all the graceful yogis had a mat of their own laid over the studio’s mat. I became a woman on a mission to look for my own non-slip mat.

I didn’t want to lug around a full sized yoga mat each time I attended a yoga class because if I had plans after class, I won’t have to carry a bulky mat around. So I did my research and found non-slip yoga towel mats. Here are the mats I’ve tried over the years!

In my first few yoga classes, I saw these vibrant eye-catching yoga towels next to mine and I couldn’t help but to ask where I can grab one for myself. I bought it the very next day. The towels are long enough to cover the whole length of the average yoga studio in-house mat. I especially love the variety of colourful designs on the mat.

Not only is it grippy, but its pretty too. This towel’s premium microfiber material quickly absorbs moisture and also dries fast. They’re also lightweight, extremely absorbent, and of course, stop my hands and feet from slipping in difficult poses.

These mats feels velvety soft under my palms and feet. Its slightly thicker than the YM grippy mat. The mat comes in 6 solid colours with  a grip pattern backing that sticks to the mat for a slip-free practice. The measurements are 74″x26″ which is much longer than most mats in the yoga studios. It’s perfect for taller yogis who hates it when their head or feet hang off the end of the yoga mat.

As I sweat, the velvety towel absorbs all my sweat and actually gets stickier, leaving no risk of slipping as my body heats up. Even in a Hot Yoga class where I’m dripping in sweat, the mat never failed me. However, although it’s compact, because it is thicker and longer than most mats, its slightly heavier to carry around. Although, I must say, it is really expensive. I love it, but my wallet cries.

By far, my favourite. The best thing of all is that it is inexpensive. It’s affordable, but that doesn’t mean it’s cheaply made. The textured weave strikes the perfect balance between softness and grip. Its durable and washes well – the colour doesn’t bleed during a wash.

Over all, non-slip yoga towels are my go-to for practicing in-studios as I can toss it in the washing machine right away when I get home. Its hassle free and convenient!  Also, having the peace of mind when I lay my forehead or cheek on the mat without thinking about who’s sweat has dripped on the mat before I came is definitely a plus!

We spend a great deal of learning in school. It’s drilled in us that when we study, it’ll bring good grades. Whether it is academics, a job, sports or an instrument, to learn to do something well, we must first examine and learn the various tasks by reading information, observing our trainer and practicing the new skill. Observation and evaluation never stops when we leave school. We can apply these into our daily lives.

Svadhyaya, the fourth Niyama of Patanjali’s Yoga Sutras, means ‘self-study.’ In anything that we do, which cultivates self reflective consciousness, can be considered Svadhyaya. It means to be mindful of finding self awareness and our daily activities without pushing away our limitations. We are all made out of a self identity, personality, habits and are sometimes driven by ego and pride. In order to move forward, we need to get really intimate with these habits, behaviors, and perceptions so that we can identify where they’re not serving us. This awareness can bring great change by allowing us to be more aware of the things we do that harm us.

Growing up, I struggled with anxiety and for a while it took a toll on my mental health. Everything that is taught to be Svadhyaya, I was doing the total opposite. I avoided situations that made me uncomfortable. I never questioned why my mind was spiraling and I let it take control of my emotions and lashed out. I felt very detached from myself and wasn’t listening to what my body needed.

As I received the help I needed, my mind recovered, but I still do have bouts of anxiety, albeit very rarely. Having a moment to check in with myself and how I am feeling in the moment – a moment of self enquiry and looking inwards keeps me in-tune with myself.

With that said, here are ways to practice Svadhyaya

Whether you are on or off your yoga mat, you can incorporate Svadhyaya into your daily life.   For example, take the time to focus your attention on your inhalations and exhalations.  Observe how the experience of breathing affects you in the moment.  Notice the thoughts, emotions, and sensations.

Through all of this, may we all be better yogis and a happier human being 🙂

Mental health is an issue that until recently has not been discussed much. Mental health is important at every stage of life, from childhood and adolescence through adulthood. Having good mental health doesn’t necessarily mean the absence of a mental disorder, it means having a positive mental characteristic. However with the hustle and bustle of work and life, sometimes finding a moment to ourselves for relaxation is difficult. And that’s where an individual’s mental health might be compromised. Therefore, we should practice relaxation techniques to fortify our minds.

Yoga Nidra is a method that brings the body into a profound state of relaxation. Yoga nidra, or yogic sleep, can be defined as sleep with a trace of awareness – an altered state of consciousness. It is an ancient technique used to reset the nervous system. There are millions of benefits of Yoga Nidra, including but not limited to reduced stress, anxiety, processing of traumas and mental clarity.

A study was conducted on a sample group of students aged between 20-30 years old to analyse Yoga Nidra’s effect on stress and anxiety. The students practiced daily for 3o mins. At the end of 6 months, the students felt more aware of the inherent potentialities of stress as they were more in-tune with their body and mind. All of them showed a positive change in relation to their stress and anxiety levels at the end of the study.

How is Yoga Nidra practiced?

Yoga Nidra is practiced in a flat lying position of savasana and follows the spoken instructions of a yoga instructor. The duration of Yoga Nidra can be as short as 5 mins or as long as an hour. Incorporating Yoga Nidra into a bedtime routine is the easiest. There is no way anyone can do Yoga Nidra wrongly. All you need is your body, and a safe place to feel completely with yourself and relaxed.

With that, here’s a Yoga Nidra video to start your relaxation journey

Paschimottanasana (PASH-ee-moh-tah-NAH-suh-nuh) can be intimidating for some because it is quite intense. I struggled with the pose initially and it took me a very long time to learn to really activate my hip flexors for a deeper forward fold. Paschimottanasana may look like only a hamstring stretch. But it’s much more than just the hamstrings. When done properly, it stretches the entire back body. This pose improves the flexibility of the lumbar spine, hips and hamstrings.

The muscular joints in action in Paschimottanasana are:

If you are practicing yoga with a herniated disc or any back injuries, be mindful of how your body feels in the pose. Come out of the pose whenever you feel discomfort or pain. Do not fold forward fully, instead, with a rolled up blanket, place it on your thighs to act as a guide that limits how deep of a fold you are in. It also gives extra support.

For stiff knees, with a rolled up blanket, place it under your knees for support. Eventually, with practice, this should ease the stiffness of the knees.

Getting into the Pose 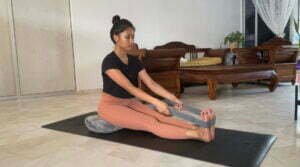 Sitting on folded blankets or a bolster helps promote a healthy pelvic tilt. A strap can help bring your hands closer s to your feet and maintain spinal integrity 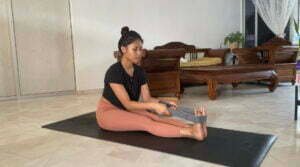 Gradually remove the blanket or bolster when you are able to keep the pelvic tilt. Inhale for length, exhale to pull the strap closer to you to bring the belly closer to the thigh 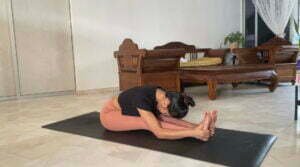 When the hamstrings are ready for a deeper fold, grab both feet. 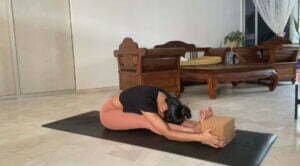 Variation for a more deeper fold: Place a block or 2 at the base of both feet. Grab the outside of the block and fold. 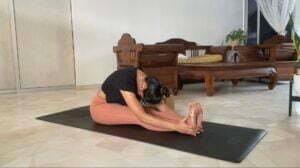 Avoid rounding your back as this may cause lower back pain and compression on the spine. Modification and be to bend the knees a lot to bring the belly to touch the thighs.

As with any other yoga pose, practice makes progress. Be patient with your body 🙂